In the Frame and in the Game!

Three of our clients had stunning works framed in this last couple of weeks to send off to national art prizes.

Dale Rhodes is a semi finalist in the Doug Moran Portrait prize with three works selected in this round! For his smallest work Dale chose a classically beautiful moulding that sets off the emotional weight and dignity of this oil portrait. Whilst the warm silver inner filet enhances the lights within the painting…we all concurred that it was just perfect!

Celia Morgan, was selected for the Jacaranda Drawing Award with an atmospheric, exquisite large scale (80cm x 175cm) drawing, Beautiful Distance. She’s seen here giving it that last minute finesse before framing. This one was tricky, as to frame a large scale drawing on paper this size and not have it curl, kink or buckle is very problematic. Especially as its size ruled out placing a mat board on top of the work.

Celia was also keen on a box frame…so after much brainstorming, we hit upon the idea of sandwiching the work between two sheets of acrylic (It’s a requirement of the JADA that all works are framed with acrylic) at the front of the frame, with around 30 cm of clear perspex around the edge. Noel, our ever patient framer, then lined the box frame with the same paper Celia had created the drawing on, (a Fabriano hot pressed watercolour paper). The result exceeded our expectations, with the large ephemeral seascape seeming to float in space and cast its shadow back into the box frame

And Nick Billington has also been selected as a finalist in JADA with his striking self portrait, intriguingly titled “ I can’t see them anymore Mike”.
The bold nature of his work perfectly suited the flat matte-black frame Nick chose and we simply floated it on a white mat board to give it some breathing space.
Having urged Nick to enter we were very chuffed that he was selected for this prestigious drawing prize. Particularly as JADA received a record 568 entries this year and only selected 47 as finalists.

So we heartedly wish all three, (and all other local artists selected), the best of luck with their entries, as we have no doubt that talent-wise they would all be worthy winners!

So for our second installment of “In The Frame,” we have gone from the oversize to the miniature with a work by local artist Hilary Herrmann. Measuring a mere 14cm x 16cm, this little treat arrived on a torn off paper remnant. It is often the contrary nature of the creative spirit to turn up when we are working on the most ‘throw away” or irregular of surfaces!

Thinking outside the bounds of accepted framing decorum Hilary was happy to play with some pretty eccentric and ornate framing options, so suffice it to say we had some fun!

The most unusual aspect of the framing was the addition of what we call a filet, inside the matboard. The filet is usually employed inside the actual moulding (frame) to give it an extra ornate flourish, but taking it inside the matboard created a very unique look and also a second layer within the frame. Almost as if a mini sub-frame is contained within the larger frame.

The matboard we chose was also very special. It was a luxurious, textured fabric called Travertine, which has a beautiful, dark, dusky metallic bronze/gold lustre, echoing the crumbly metallic tones and texture of Hilary’s lovely drawing.

Hilary also opted for the Artglass, which offers 100% uv protection as well as having very little reflection, so you almost feel as if you can reach in and touch the actual artwork.

Finally there was the outside frame, for this we choose a classical, ornate frame of substantial proportions. Which I think demonstrates that just because it is a small work it does not necessarily follow that the frame needs to be small, or modest.

And then of course we left it to our framer Noel to bring the vision to fruition! The end result is that this small and delightful drawing of Hilary’s is presented as a rare treasure that asks us to stop in our tracks, look into it and really see its beauty and preciousness. 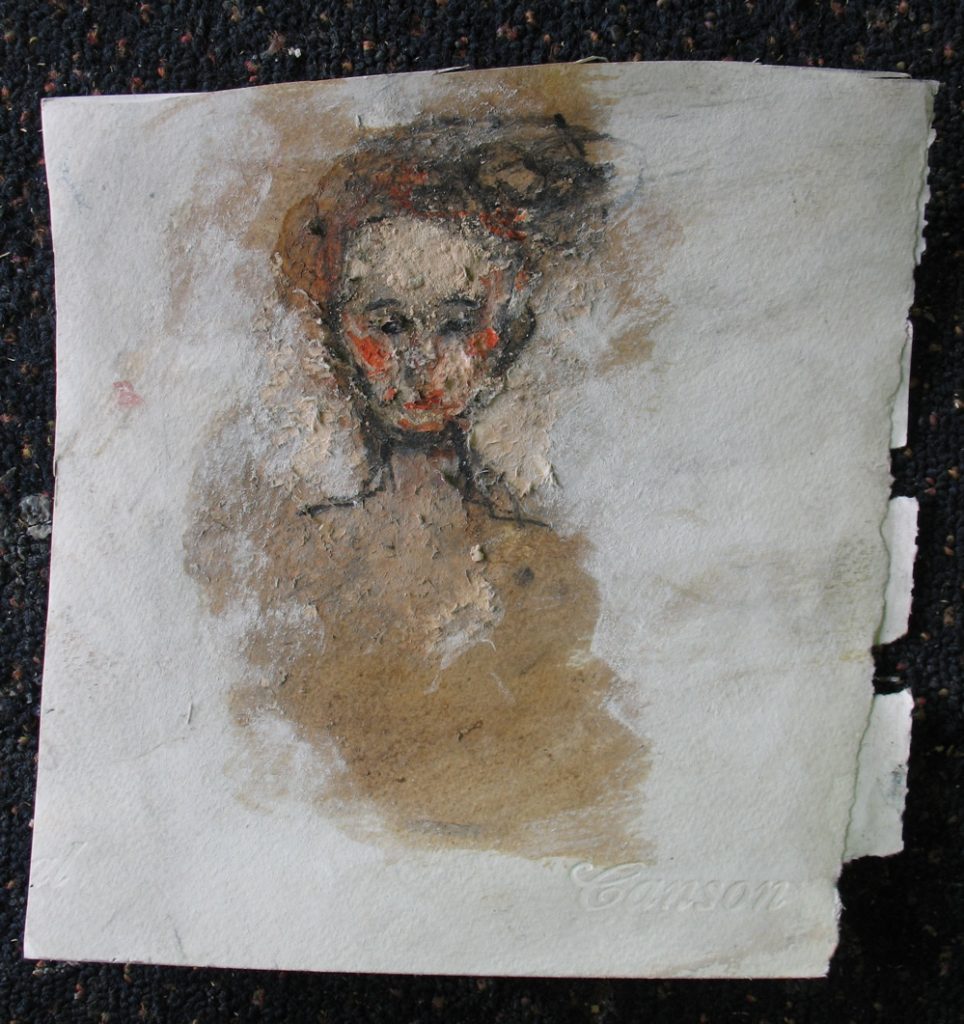 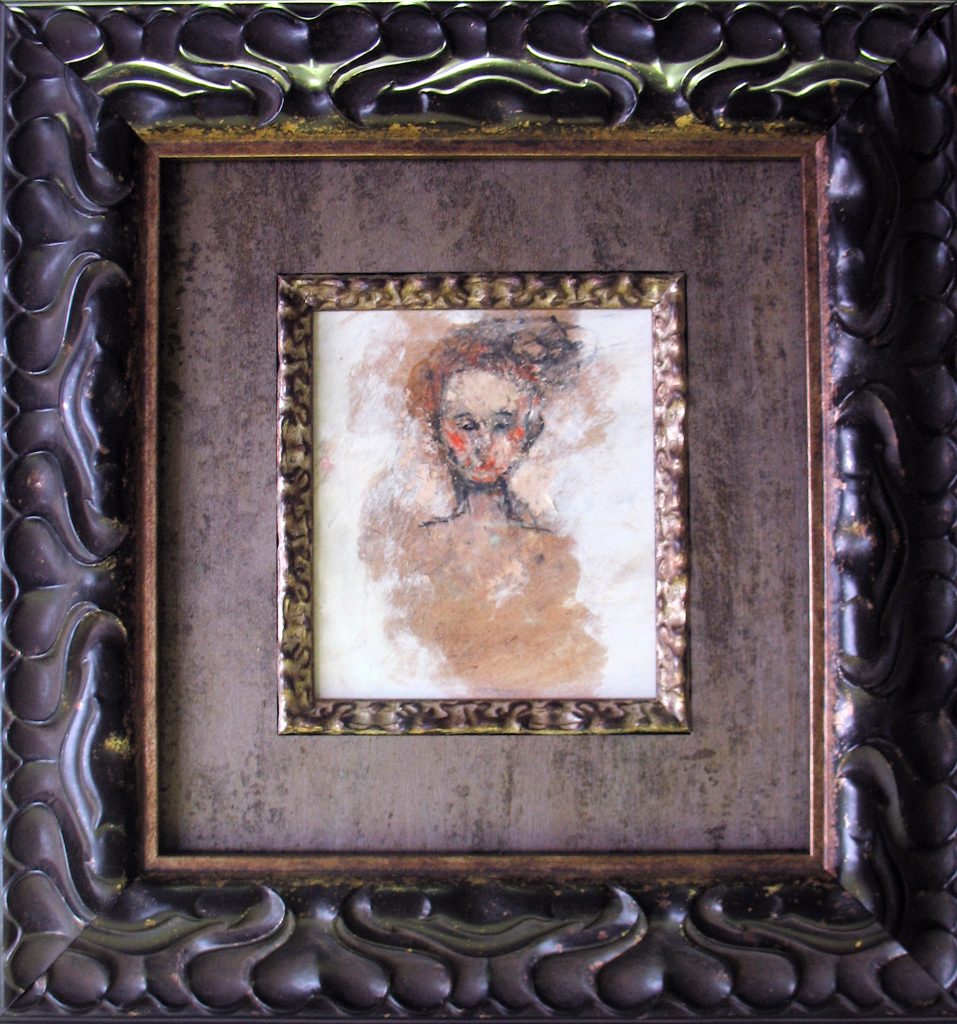 Within the framing wing of Still @ The Centre we receive an extraordinarily diverse array of artworks, artefacts and items to frame so we thought it might be fun to share a few of these intriguing pieces and to show you the framing solutions reached, none of which would be possible without the impeccable craftsmanship of our endlessly patient and ingenious framer Noel. So here goes the first installment of our new In The Frame” periodical.

Recently one of our clients, Paul, brought in a beautiful very large format photograph entitled Poolside Glamour (also known as Poolside Gossip) by the renowned American Photographer Slim Aarons, (Born George Allen Aarons,October 29, 1916 – May 29, 2006).
Aarons was one of “the set” so to speak and in his words photographed “attractive people doing attractive things in attractive places.” The photograph Poolside Gossip, (1970), being a classic example of his oeuvre. “I knew everyone” he said in an interview with The (London) Independent in 2002, “They would invite me to one of their parties because they knew I wouldn’t hurt them. I was one of them.” It’s also worth noting that Slim Aarons used neither a stylist nor a make up artist when taking his photos!

Aaron’s photographs are recognizable by their hyper-reality, saturated light and high definition and so there is a danger of losing this clarity and beauty by putting another layer between the work and the viewer. As a photographic work on paper there is, however, no other choice but to put the work behind a clear protective and archival layer. With a piece like this the only real option, to do justice to that clarity and colour saturation, was to opt for Museum glass, this has almost no reflection, (which results in a work seeming almost spookily to have no glass on it), and 100% UV protection.

Paul then chose a clean-lined, yet bold, matte white frame which really suits the style of the work without in anyway competing with the image. The photograph was an daunting 84cm x 122cm which also meant that everything, (glass, acid free foam core backing and matboard), had to be ordered in oversize. As such the matboard choice was white or white! So we were lucky that that was the perfect colour for this work.

So here is a shot of the framing in progress and the work once completed. 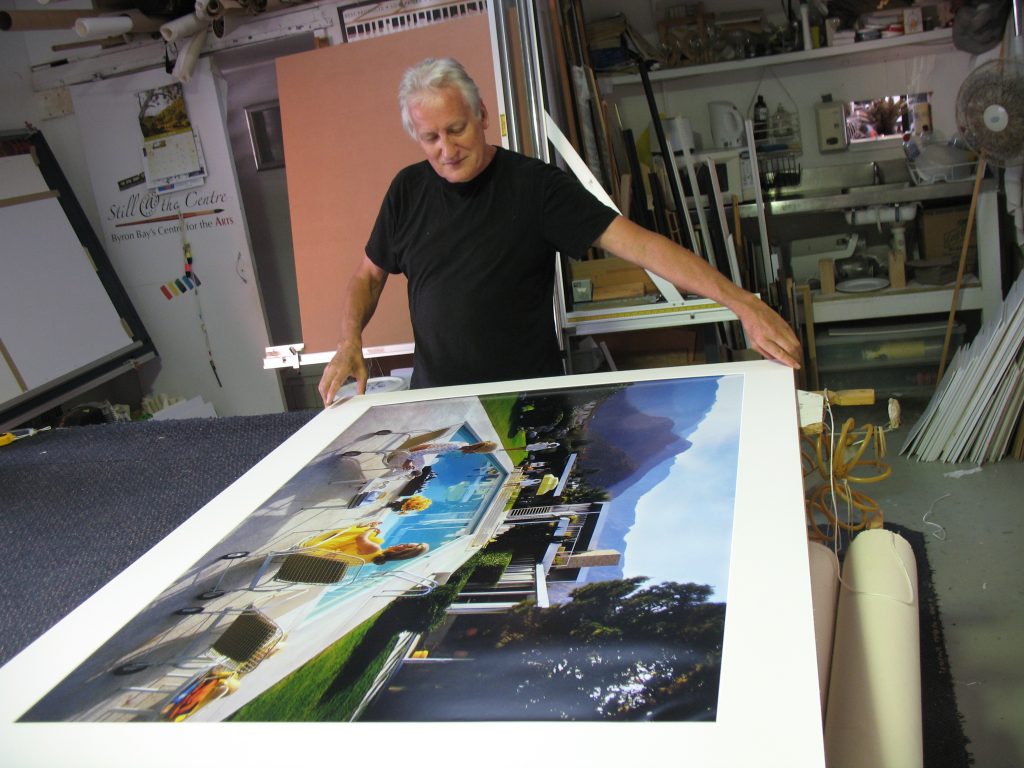 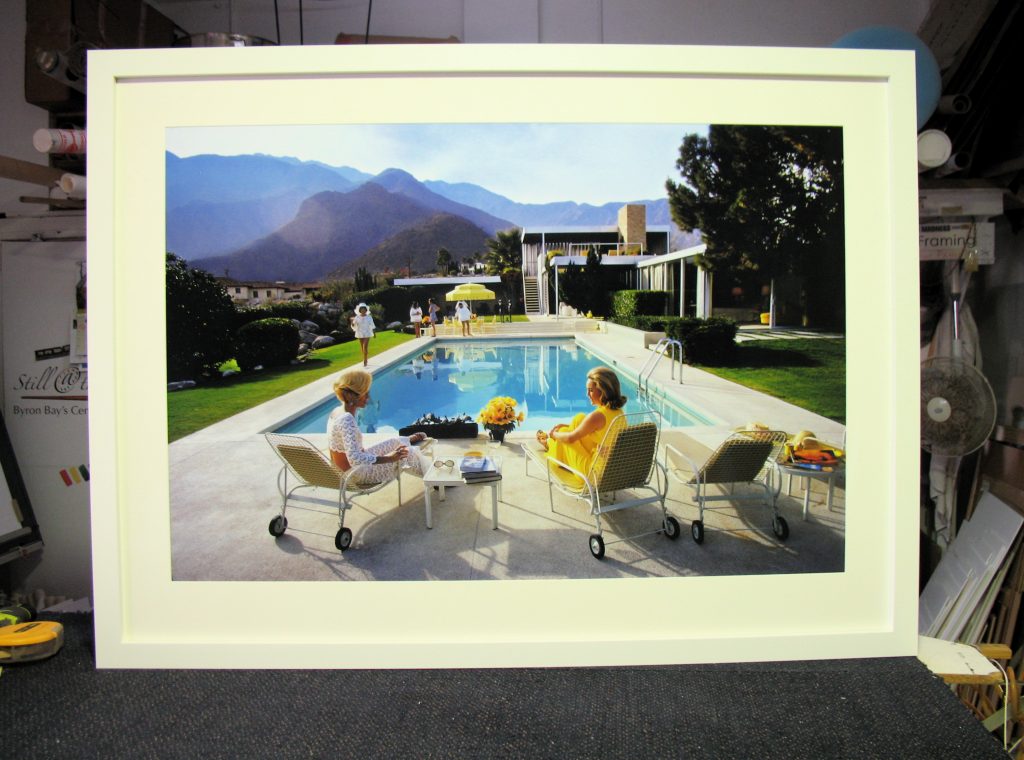 By the by, in 2015, the organizers of Palm Springs’ Modernism Week invited the two women in the forefront of the original work, Nelda Linsk and Helen Kaptur to return to the Kaufmann House for the 45th anniversary of the photograph “Poolside Gossip.” Credit Fred Moser and Kelly Lee. 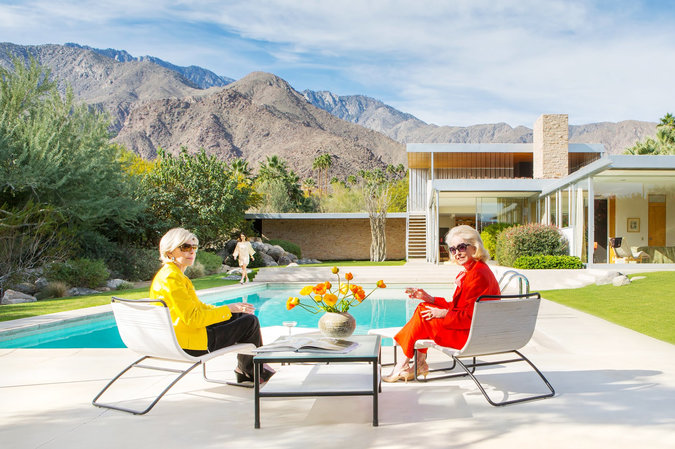